Type with one hand, no special hardware required! I wrote Keyb while holding my sleeping daughter in one hand. It’s also great for permanent and temporary disabilities, or tasks where you want to keep one hand on the mouse, like gaming or spreadsheets.

How does it work? Simply hold down the spacebar, and the left and right half of your keyboard magically swap places. The two halves are mirrored, so if you would normally type a letter with your left middle finger, use your right middle finger. The same is true in the other direction. If you can already touch-type, you’ll be surprised how quickly your brain gets used to it! 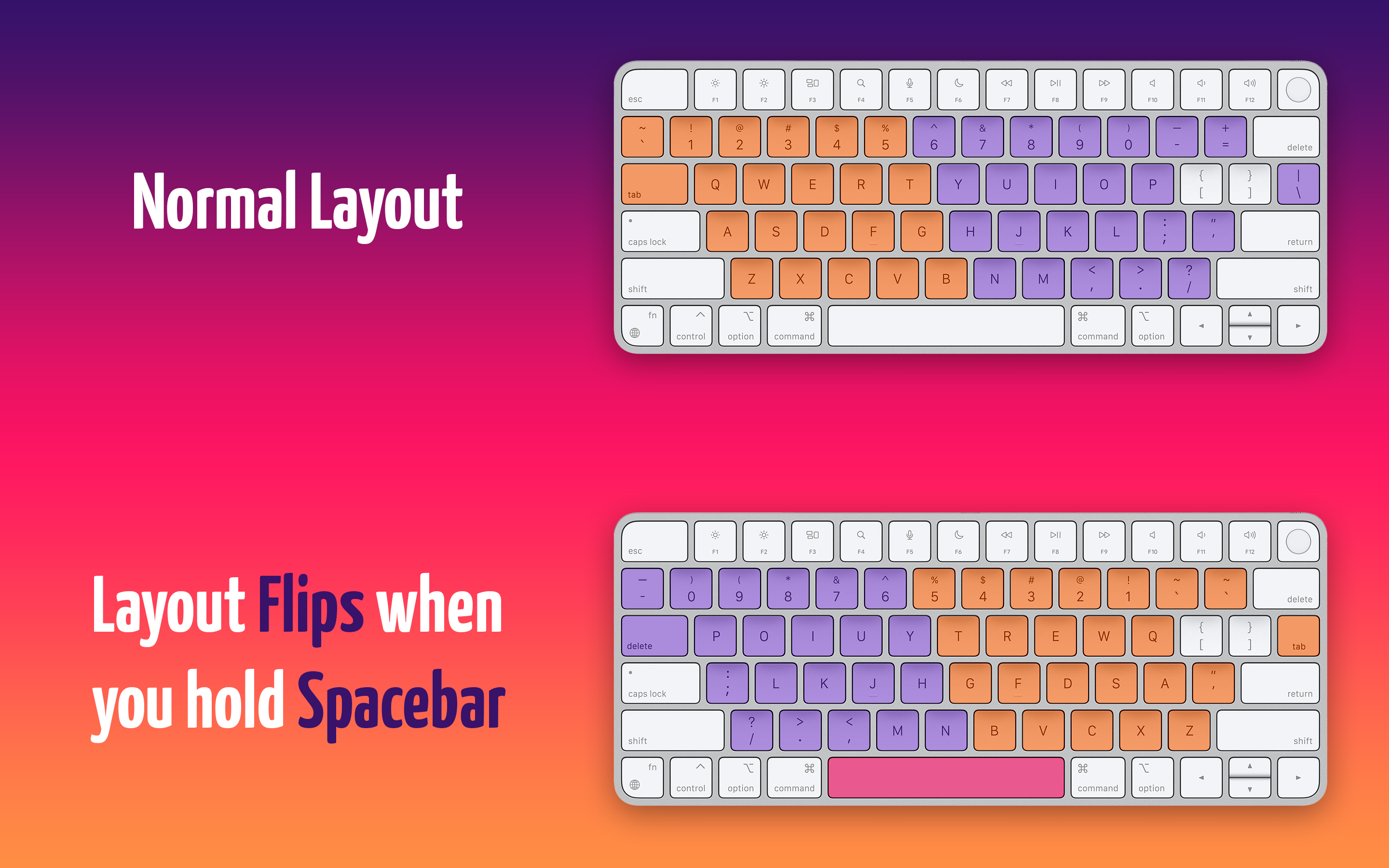 There’s no need to configure which hand you are going to use. Simply launch the app and check the box to enable one-handed typing. That’s it!

Note: Keyb has not been tested with any keyboard layouts other than US-English QWERTY. Other layouts or languages may work. If they don’t, please contact me with more info.

Privacy information: Keyb requires accessibility permission in order to work, because it needs to intercept and modify the letters you type. It never saves what you type, and does not connect to the Internet or send your keystrokes anywhere. The letters you type are private to you! Neither the maker of Keyb nor Apple can access them. If you’re technically inclined, Keyb is open-source, so you can see for yourself on GitHub

Questions or comments about Keyb? I’d love to hear from you! File an issue on GitHub or send me an email.

Convert between text, decimal, hexadecimal, and binary representations of UTF-8 text. An indispensable tool for any developer working with text, including stored files or network traffic. Also a great way to explore the mysterious world of Unicode!

Questions or comments about Unicycle? I’d love to hear from you! Send me an email.

Type in juggling patterns, and Jugglebot will animate them so you can see how they work! Sporting a custom animation engine, Jugglebot has the smoothest animations available. Try slowing it down to make learning easier.

Got an Apple Watch? Jugglebot is great for learning while juggling! Tap the screen to change the pattern, press firmly to choose multicolored balls, and spin the crown to change the speed.

Jugglebot also includes a guide to getting started with siteswap notation, and resources for learning more. Jugglebot currently supports only vanilla siteswap, but may support more advanced notation in the future.

Questions or comments about Jugglebot? I’d love to hear from you! Send me an email.

Learn to talk backwards by recording your voice and playing it back in reverse! Share the results with your friends.

Peep was inspired by this video about a guy who can talk backwards. He claimed it was a learnable skill, so I thought it would be fun to make an app to test it out.

How do I use Peep?

Tap the red Record button to start and stop recording. Tap the blue Reverse Play button to play back your recording in reverse. Tap the white Share button to share your reversed recording with friends.

Questions or comments about Peep? I’d love to hear from you! Tweet to @PeepReverser or send me an email.

Draw pictures by spinning your iPad, iPhone, or iPod touch.

Are breakfast trays and magazines in danger whenever you walk into the room? Do pillows and notebooks flee before you? Are people likely to get dizzy if they talk to you for too long? If so, you need to get Padiddle! It’s the only iOS app that combines drawing and juggling in one exciting package.

Warning: if you are not 100% confident in your abilities to padiddle, please use this app ​over a bed or other soft surface. You may find it difficult to padiddle an iPhone (I can’t do it!). I have gotten interesting results by spinning my iPhone in an office chair, or tossing it (gently!) into the air with a spin.

Huh? Padiddle? I thought that was a travel game where you spot cars with missing headlights.

That definition was news to me. Among jugglers and object manipulators, padiddling is the controlled spinning of a flat object on a finger. Wikipedia has a brief entry on padiddling.

I don’t know how to padiddle. Can I still use this app?

Padiddle uses the spin of your device to draw a picture, and any way that you can figure out to (safely!) impart angular velocity should work. I’ve found that an office chair or lazy Susan works well.

How can I learn how to padiddle?

I recommend starting with a firm pillow or, better yet, a plastic lunch tray. Just give it a try. If you don’t get it after a bit of practice, look on YouTube for tips.

Padiddle uses the gyroscope in your iPad, iPhone, or iPod touch to keep track of which direction it is facing while it spins. You can pick from a library of twelve hand-crafted color schemes. Combine them to create something new!

How did you get the idea to draw pictures with a spinning iPad?

My reply, and Luke’s fateful response:

@zeveisenberg I'm using SketchBookX, autodesk. But wishing for someone to write an app that uses gyroscope data to generate the image #hint

Luke Wilson was a fantastically creative juggler whom I had met briefly when I saw him perform as part of The Shoebox Tour in Buckfield, Maine. We corresponded on twitter a bit, and he helped to beta test early versions of Padiddle. Many of his ideas made it into the final app. Sadly, Luke died of cancer in October of 2012. I wish he could have seen the finished version of Padiddle, but we can all remember him when we create cool and unexpected things.

If I drop my iPad, will you pay for a new one?

If I drop my iPad, will Apple pay for a new one?

Double nope. I’m serious about being careful! Practice with a pillow or a cafeteria tray first, or spin your iOS device over a bed or soft carpet.

Questions or comments about Padiddle? I’d love to hear from you! I’m @ZevEisenberg on Twitter. You can also send me an email. Padiddle is also open-source, so you can file an issue or pull request on GitHub!

My apps, Jugglebot, Peep, Padiddle, Unicycle, and Keyb, do not collect any information from users. They do not connect to the Internet. The files that they save (audio recordings that you make in Peep and images that you draw in Padiddle) do not leave your device unless you explicitly share them using the Share button in each app. Any changes to this privacy policy will be reflected here, and will be mentioned in each app’s release notes.